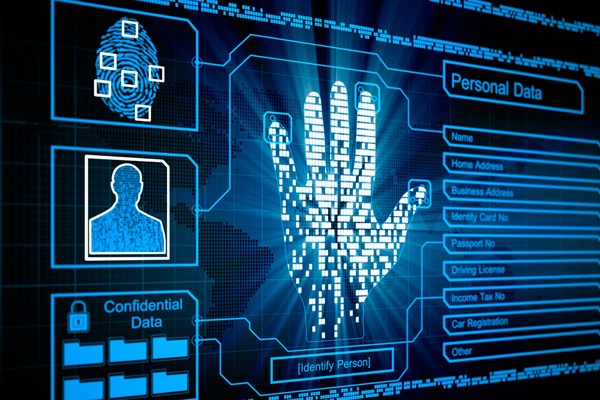 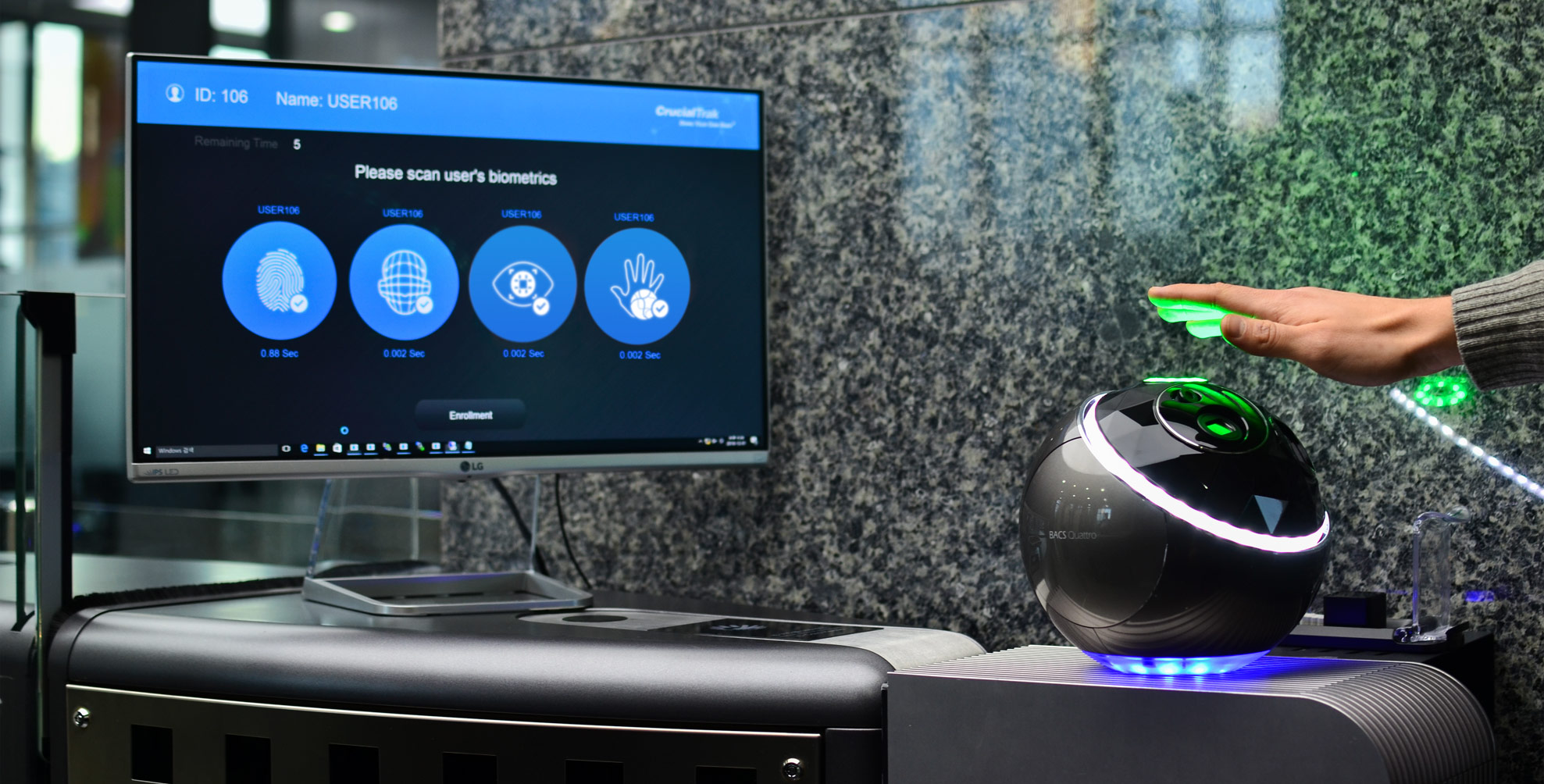 “Biometry” in literal terms means “measurement of life”. In a broader sense, it designates the quantitative study of living beings. It covers a wide range of applications, including anthropology and medicine.

The Term “Biometrics” is the measurement and statistical analysis of people’s unique physical and behavioral characteristics. The technology is mainly used for identification and access control, or for identifying individuals who are under surveillance. The basic premise of biometric authentication is that every person can be accurately identified by his or her intrinsic physical or behavioral traits.

An early cataloging of fingerprints dates back to 1891 when Juan Vucetich started a collection of fingerprints of criminals in Argentina. Josh Ellenbogen and Nitzan Lebovic argued that Biometrics is originated in the identificatory systems of criminal activity developed by Alphonse Bertillon (1853–1914) and developed by Francis Galton’s theory of fingerprints and physiognomy. According to Lebovic, Galton’s work “led to the application of mathematical models to fingerprints, phrenology, and facial characteristics”, as part of “absolute identification” and “a key to both inclusion and exclusion” of populations.  Accordingly, “the biometric system is the absolute political weapon of our era” and a form of “soft control”. The theoretician David Lyon showed that during the past two decades biometric systems have penetrated the civilian market, and blurred the lines between governmental forms of control and private corporate control. Kelly A. Gates identified 9/11 as the turning point for the cultural language of our present: “in the language of cultural studies, the aftermath of 9/11 was a moment of articulation, where objects or events that have no necessary connection come together and a new discourse formation is established: automated facial recognition as a homeland security technology.”

Authentication by biometric verification is becoming increasingly common in corporate and public security systems, consumer electronics, and point-of-sale applications. In addition to security, the driving force behind biometric verification has been convenience, as there are no passwords to remember or security tokens to carry. Some biometric methods, such as measuring a person’s gait, can operate with no direct contact with the person being authenticated.

Physiological identifiers relate to the composition of the user being authenticated and include facial recognition, fingerprints, finger geometry (the size and position of fingers), iris recognition, vein recognition, retina scanning, voice recognition and DNA matching. 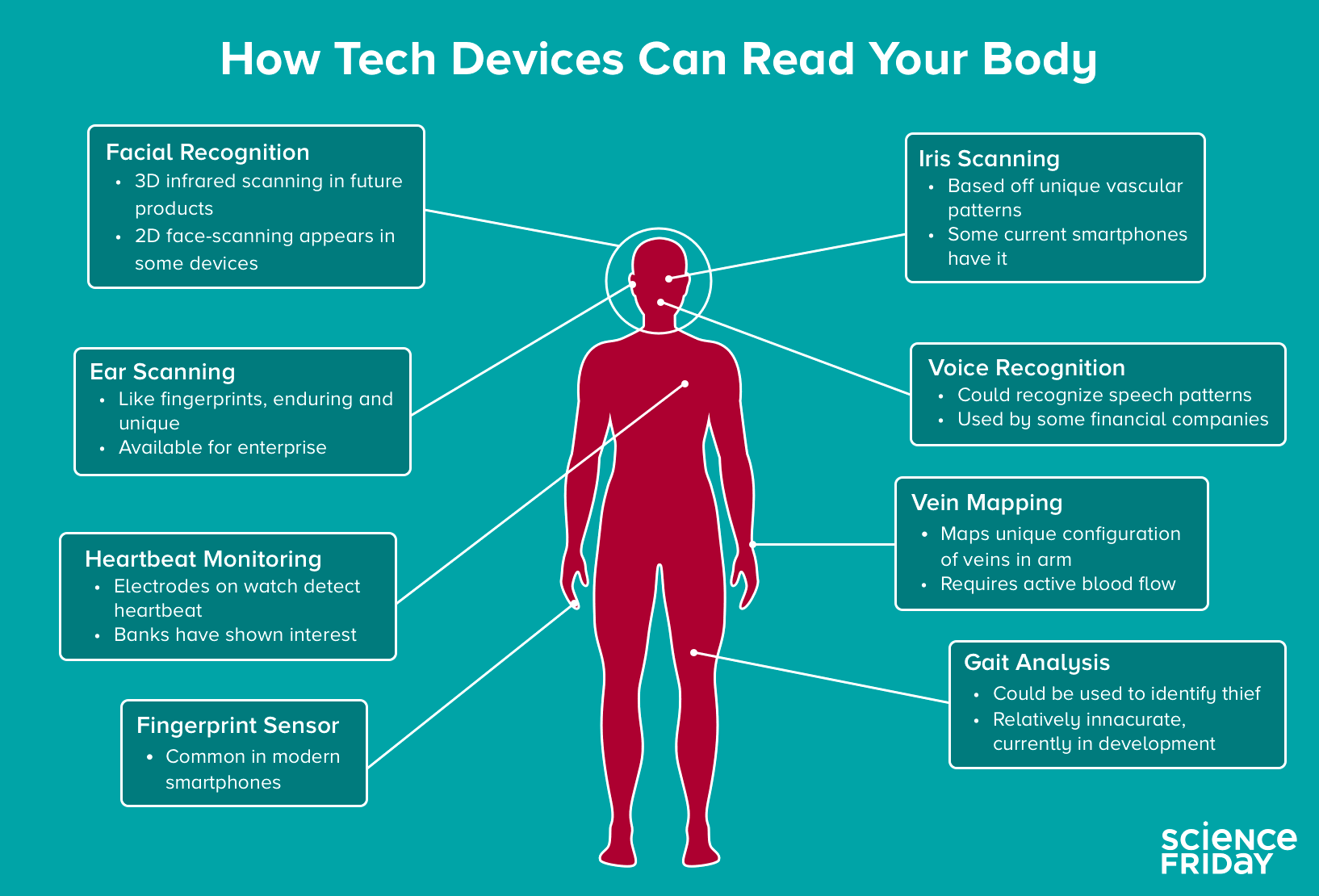 Components of biometric devices include:

Biometric data may be held in a centralized database, although modern biometric implementations often depend instead on gathering biometric data locally and then cryptographically hashing it, so that authentication or identification can be accomplished without direct access to the biometric data itself.

One of a State’s main missions is to guarantee the identity of its citizens. Digital transformation of society and economies are driving countries to meet new challenges to protect their citizens against identity theft and provide safe, online services. Biometrics helps address this challenge: it links our identities with our physical and digital selves. This reduces the risk of identity theft, and facilitates the implementation of new identity management services which are both practical and secure. Morpho supports governments at several levels:

Biometrics, whether used on a PC, smartphone or tablet, is a viable alternative to passwords and other identifiers. It guarantees people’s identities to ensure the security of online operations and services:

Biometrics facilitates investigations by law enforcement units. The biometric systems from are deployed in over 70 countries, by different security agencies.  Biometric technologies are also used at borders: they can detect suspicious persons, or authorize access for persons who do not entail a risk.

Biometrics means you no longer have to use unwieldy passwords. To be effective, a password has to meet four demanding criteria: it has to be changed frequently, be complex, you must not use the same one for different accounts and, above all, it must not be written down! For people on the move, biometric authentication is easier than entering a complex password several times a day.

As a weapon against Identity Theft

Unlike passwords, biometrics is the only method that establishes a link between our physical and digital identities. This helps us prevent identity theft, enabling us to prove that a person accessing an account or device is really who he or she claims to be. Stealing biometric data without the person’s knowledge, and then reproducing it in a useable form is not as easy as stealing a password and using it remotely.

While it’s relatively easy to access thousands of accounts with stolen passwords in just a few seconds, it’s much harder to hack biometric databases. In addition to gaining access to biometric data, thieves also have to be able to produce fakes for each stolen element, and use them with the appropriate detector – thus eliminating the possibility of any large-scale attack. While the number of PIN codes is limited to the digits between 0000 and 9999, biometric data is unlimited.

Biometric identifiers depend on the uniqueness of the factor being considered. For example, fingerprints are generally considered to be highly unique to each person. Fingerprint recognition, especially as implemented in Apple’s Touch ID for the iPhone, is the first widely used mass market application of a biometric authentication factor. Other biometric factors, including retina, iris, vein, voice and facial scans, have not been adopted widely so far, in some part because there is less confidence in the uniqueness of the identifiers or because the factors are easier to spoof.

Stability of the biometric factor can also be important to acceptance of the factor. Fingerprints do not change over a lifetime, while facial appearance can change drastically with age, illness or other factors. The greatest privacy issue of using biometrics is that physical attributes like fingerprints and retinal blood vessel patterns are generally static and cannot be modified. This is in distinction to non-biometric factors like passwords (something you know) and tokens (something you have), which can be replaced if they are breached or otherwise compromised, including over 20 million individuals whose fingerprints were compromised in the 2014 U.S. Office of Personnel Management data breach.

While high-quality cameras and other sensors help enable the use of biometrics, they can also enable attackers. Because people do not shield their faces, ears, hands, voice or gait, attacks are possible simply by capturing biometric data from people without their consent or knowledge.

An early attack on fingerprint biometric authentication is called the gummy bear hack, and it dates back to 2002 when Japanese researchers, using a gelatin-based confection, showed that an attacker can lift a latent fingerprint from a glossy surface; the capacitance of gelatin is similar to that of a human finger, so fingerprint scanners designed to detect capacitance would be fooled by the gelatin transfer.

Other biometrics factors can also be defeated by determined attackers.

After Apple released the iPhone X, it took researchers just two weeks to bypass Apple’s Face ID facial recognition using a 3D-printed mask; Face ID can also be defeated by individuals related to the authenticated user, including children or siblings.

The market share of biometric technology in today’s business is skyrocketing, it is predicted to exceed approximately 32.73 Billion USD by 2022.

As per research findings, some biometric technologies which are going to rule in 2018 are the following:

One of the most advanced biometrics technologies to be available in 2018. If you watched the movie Mission Impossible 5, you already know how it works. In short, it scans the way people walk and move. As everyone has a unique style of walking and moving, it is quite the perfect technology which will rule the future of biometrics from 2018.

It is one of the most critical biometric technologies so far. The growing evolution of biometrics has already replaced the demand for passwords and PINs. But heartbeat biometrics will replace the necessity of car keys, house keys, credit cards, and boarding passes too. Heartbeat is also a unique human characteristic, as like fingerprint, retina, palm veins, etc. It seems like this technology will allow you to sit in front of your laptop and unlock automatically, and when you go for a walk, it’ll be locked again so that nobody can login to your pc. The same thing will happen with your car wheel, door handle, etc.

Keystroke dynamics (also known as typing biometrics) will scan the pattern of your keystrokes. It is also a behavioral biometric as like heartbeat biometrics. In this method, the biometric device will identify you by your typing pattern, rhythm and speed. Mostly, keystroke recognition will work on computer keyboards, mobile phones, and touchscreen panels. It is very useful for corporations because you need nothing but a keyboard to verify yourself. It is also a unique human characteristic which is difficult to recreate.

It is a new and unique addition to biometric authentication when you just need to verify yourself with your sweat. Your physical traits such as fingerprint, retina, palm vein can be copied, but your sweat is one of a kind and hard to forge by anyone. The best part of this technology is everybody, including the people without eye or finger or unable to memorize things, can be recognized by the sweat recognition

Your body odor could also be your identity card in the upcoming future of biometrics. A report says that researchers at Spain’s Universidad Politecnica de Madrid and tech firm IIia Sistemas SL are developing a system that can verify people by their scent signatures. Other biometric authentication systems, such as facial recognition, have higher error rates which is highly concerning for researchers. As body odor is unique and everybody can be enrolled by this technology much like sweat recognition, it is deemed more reliable and widely applicable.

The author is a well known risk management Professional with an exposure Global Security, Information Management, Criminal and Investigative Research.

17 thoughts on “BIOMETRICS – All about Biometrics”