The word ‘Dementia’ describes a group of symptoms (syndrome) linked to a decline in memory or loss of cognitive functioning (thinking, remembering & reasoning), behavioral abilities or other thinking skills severe enough that it interferes with a person's ability to perform his/her daily activities. Other Problematic functional areas include language skills, visual perception, problem-solving, self-management, and the ability to focus and pay attention, controlling emotions and personality changes. 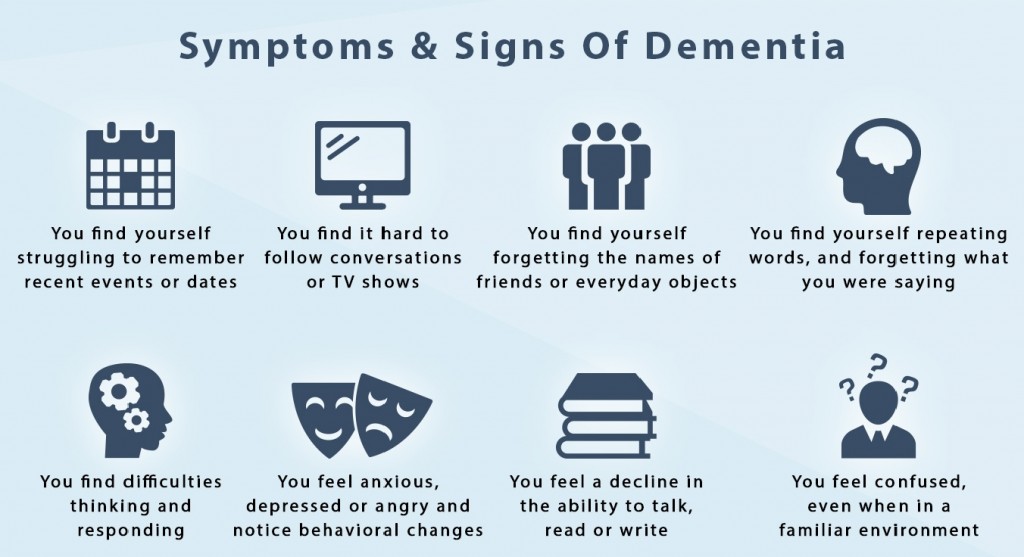 Dementia is progressive; the symptoms start out slowly and gradually get worse. The severity of dementia ranges from the mildest stage when it is just beginning to affect a person's functioning, to the most severe stage, when the person becomes completely dependent on others for basic activities of living.

In the process of aging, the once-healthy neurons in the brain stop working, lose connections with other brain cells, and die. But with dementia patients, the loss is greater. Although dementia is more common among older people (up to 50% of all people aged 85 or older may have some form of dementia), there are many people who live into their 90s and beyond without any signs of dementia. One type of dementia, frontotemporal disorders, is more common in middle-aged than older adults.

Types of Dementia's are based on what they have in common, such as the part of the brain that are affected or whether they worsen over time 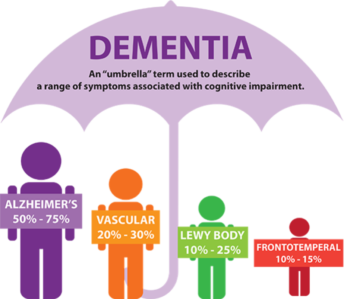 Those that progress and aren't reversible include:

It is also common for people to have mixed dementia—a combination of two or more types of dementia. For instance, a person might have both Alzheimer's disease and vascular dementia.

Although Alzheimer's disease is the most common cause of progressive dementia in older adults, there are a number of other causes too. Depending on what the cause is, certain dementia symptoms can be reversed. Different types of dementia are associated with particular types of brain cell damage in particular regions of the brain. For example, in Alzheimer's disease, high levels of certain proteins inside and outside brain cells make it hard for brain cells to stay healthy and to communicate with each other.

The brain region called the hippocampus is the center of learning and memory in the brain, and the brain cells in this region are often the first to be damaged. While most changes in the brain that cause dementia are permanent and worsen over time, thinking and memory problems caused by the following conditions may improve when the condition is treated or addressed:

Take a look at the causes of different types of Dementia:

Alzheimer’s: Although the exact cause of Alzheimer's disease isn't known, the following cause is most likely to be:

Vascular Dementia: It occurs as a result of damage to blood vessels in the brain.

Lewy Body Dementia: It occurs when Lewy bodies (abnormal clumps of protein) that have been found in the brains.

Frontotemporal Dementia: This is a group of diseases characterized by the breakdown (degeneration) of nerve cells in the frontal and temporal lobes of the brain, the areas generally associated with personality, behavior, and language.

Mixed Dementia: Autopsy studies of the brains of Dementia patients aged 80 and older indicate that many had a combination of Alzheimer's disease, vascular dementia, and Lewy body dementia. Studies are ongoing to determine how having mixed dementia affects symptoms and treatments.

There is no particular test to determine if someone has dementia. However, doctors diagnose Alzheimer's and other types of dementia based on a careful medical history, a physical examination, laboratory tests, and the characteristic changes in thinking, day-to-day function and behavior associated with each type. Doctors can determine that a person has dementia with a high level of certainty. But it's harder to determine the exact type of dementia since the symptoms and brain changes of different dementias might overlap. In some cases, a doctor may diagnose "dementia" and not specify a type. If this occurs it may be necessary to consult a neurologist or gero-psychologist. 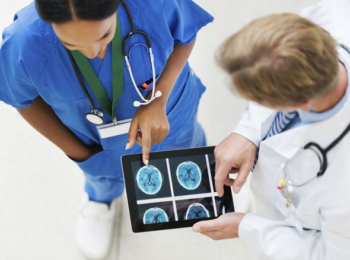 Diagnosing dementia requires that a minimum of two core mental functions be impaired enough to interfere with daily living- such as memory, language skills, ability to focus, paying attention, ability to reason, problem-solving and visual perception. The patient's medical history and symptoms will be reviewed and the doctor will conduct a physical examination.

A lot of Personal DNA testing kits from companies like 23andme which claim to reveal a person's chance of developing dementia are now widely available to buy over-the-counter or order online. Their proponents say that it's better to know your dementia risk and thereby be able to make some positive lifestyle changes that could actually reduce it, such as giving up smoking, taking more exercise or eating healthy. But experts remain skeptical about the accuracy and worth of these tests and say that anyone who is worried about inheriting dementia can take simple steps to reduce their risk anyway – without needing to buy a DNA test.

One could go ahead and take these genetic tests if

Genetic testing is NOT available if one has Vascular dementia, Dementia with Lewy bodies or Late-onset Alzheimer's.  However, if one wants to find out if they possess one of the genes associated with late-onset Alzheimer's, an over-the-counter DNA testing kit can be purchased.

Treating dementia is based on its cause. While there is no cure or treatment yet for most cases of progressive dementias, including Alzheimer's disease, there are drug treatments that may temporarily improve symptoms. Drugs used to treat Alzheimer's can also be sometimes prescribed to help with symptoms of other types of dementia. Non-drug therapies are also sought to alleviate some symptoms of dementia. Ultimately, the path to effective new treatments for dementia is through increased research funding and increased participation in clinical studies.

The following drugs are used to temporarily improve dementia symptoms. 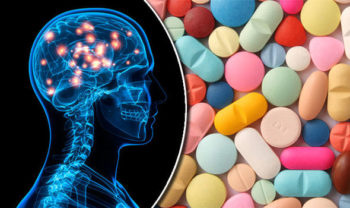 Several dementia symptoms and behavior problems might be treated initially using nondrug approaches, such as the following therapies:

Dementia symptoms and behavior problems will progress over time. Caregivers might try the following suggestions:

Several herbal remedies, dietary supplements, and therapies have been studied for people with dementia and Some of them are considered beneficial. However, Use caution when considering these since they aren't regulated, and claims about their benefits aren't always based on scientific research.

Prevention is Better than Cure, Especially Since There's No Cure Yet.

Although there's no sure way to prevent dementia, there are certain steps you can take that might help. Though More research is needed on this, it might be beneficial to do the following:

Health systems globally struggle to provide adequate coverage of diagnostic and treatment services for patients with dementia. Care is often fragmented, uncoordinated, and unresponsive to the needs of these people. The demographics of the escalating problem have led researchers to estimate care costs over the coming decades. In EU countries that had 7.22 million people living with dementia in 2008, estimated to increase to 14.3 million by 2050, costs are projected to increase to €250 billion by 2030 for the whole of Europe (Wimo et al. 2009). In the USA, dementia is one of the most challenging and costly to treat diseases with $277 billion projected to be spent on dementia care by the end of 2018 (Alzheimer’s Association 2018). In the UK, the total cost of dementia to society was £26.3 billion (2017) projected to reach £55 billion by 2040 (Prince et al. 2014).

In most countries around the world, the management and economic support for dementia care are mainly provided by the extended kin. Given the many years of dementia progression, informal costs of care can cause distress to families and lead them into financial hardship. UK estimates show that out of the total £26.3 billion spent for dementia care in 2017, £11.6 billion were contributed by the work of unpaid carers and family members, while only £4.3 billion were spent by healthcare sector and £10.3 billion by social care (publicly and privately funded) sector. In the USA 16 million people provided unpaid care in the form of physical, emotional and financial support – a contribution to the nation valued at $232 billion (2017) (Alzheimer’s Association 2018). 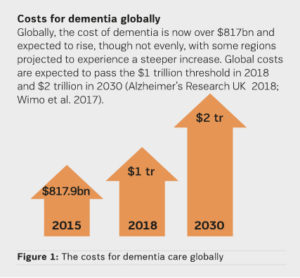 These sobering estimates should drive intensified national and global action to help improve medical and public health interventions for dementia, as well as social and wider public policies. National authorities and societies not adequately preparing to address dementia will be severely disadvantaged both in societal and financial burden.

A recent study by Northwest Mutual Insurance discovered that caregivers in the United States are spending more money on caring while financially planning less. The study found that 7 in 10 caregivers reported lowering their own spending to be able to pay for caregiving costs for a parent or senior loved one.

Facts and figures from the C.A.R.E. report:

Some Latest News on Dementia:

Right now, volunteers are sought to participate in clinical studies and trials about Alzheimer's and other dementias. To name a few:

Dementia Care/Treatment in the Future:

Telemedicine is emerging as an effective way to provide consultation and care to rural residents who may not have access to specialty services. 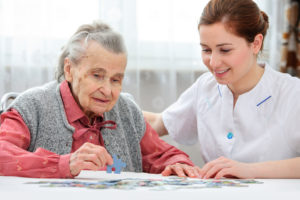 A “city” for people with dementia:

An average nursing home can be depressingly institutional, For the growing number of people suffering from dementia, these facilities can be even worse. 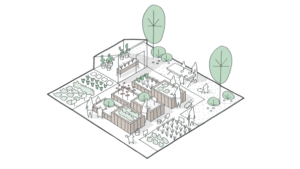 Their repetitive architecture makes it easy to get lost, and they look nothing like the places where patients have lived their entire lives. The Copenhagen-based firm Nord Architects is building a series of centers for patients with Alzheimer’s and dementia that feel more like villages or cities, rather than bleak institutions.

Robots Could Help People With Dementia 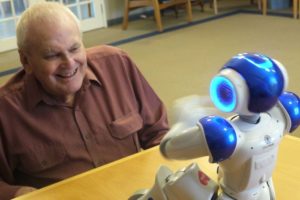 A team of international scientists is exploring the ways robots can help people living with dementia. According to them, the burden on caregivers of people with dementia is very high and caregivers often need a break during the day to get other things done. Robots can help provide extra care. They believe that these robots can also keep a watchful on eye on a parent or senior loved one for long-distance caregivers, help patients get in and out of bed and remind them to take medication.

donna albert May 2nd, 2019
HELLO EVERYONE. Natural herbs have cured so many illness that drugs and injection cant cure. I''ve seen the great importance of natural herbs and the wonderful work they have done in people lives.

Main Moderator Mar 15th, 2019
Thank you for your feedback. We invite you to join Witanworld and share your knowledge with our global community.

Shiva Krishna Mar 14th, 2019
Thank you for this inspiring article. This is excellent information. It is amazing and wonderful to visit your site. Dr.Anki Reddy homeopathy approach treating the patient refers for conventional medicine.

Main Moderator Mar 2nd, 2019
Dear Finlay - Thank you for sharing your feedback & we would like to hear more the Therapy. Also you can register on Witanworld community to share your experience to help other community members. We will to promote these nature therapies to help our regional members. Please share more details on mktd.dept@witanworld.com

Finlay Cedar Mar 2nd, 2019
My husband has been diagnosed with Alzheimer in 2016 there's a herbal foundation in Johannesburg they cured my husband Alzheimer's disease . Pm me i will give their details. People can search about them on Google or youtube(total cure herbal foundation). My husband faced many difficulties and was in several depression, Trouble understanding visual image, aggression ,so many,. This thing happened to him in very crucial stage of our life. 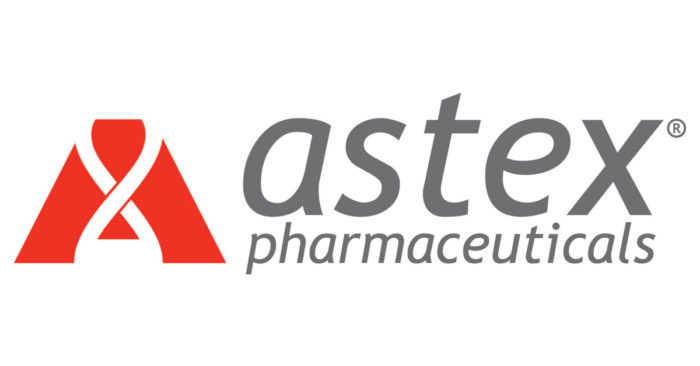 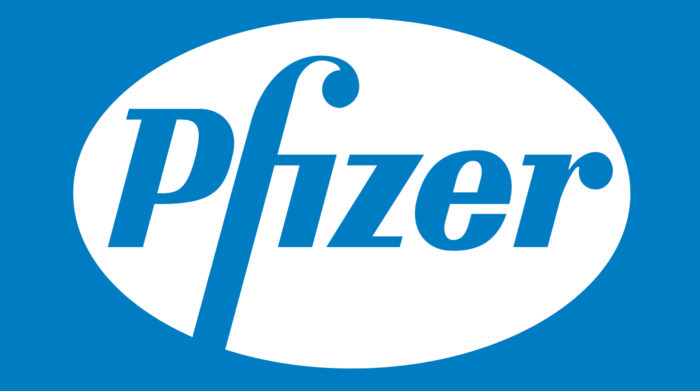 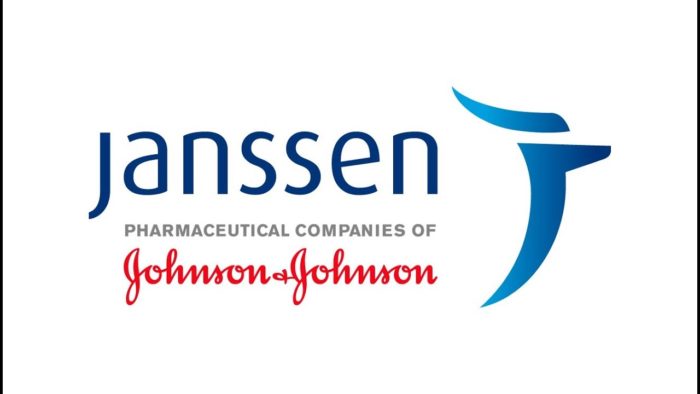 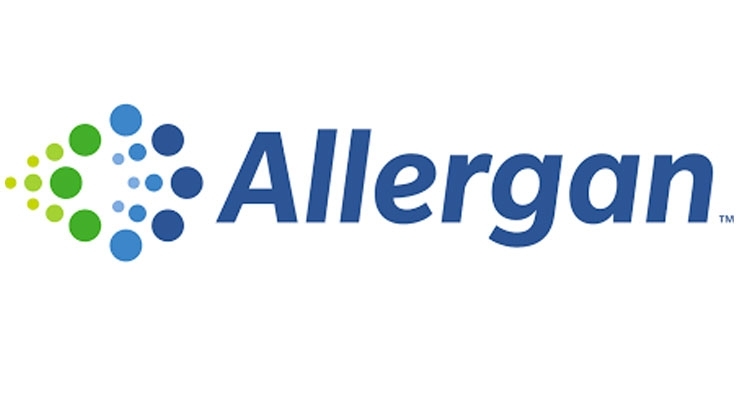 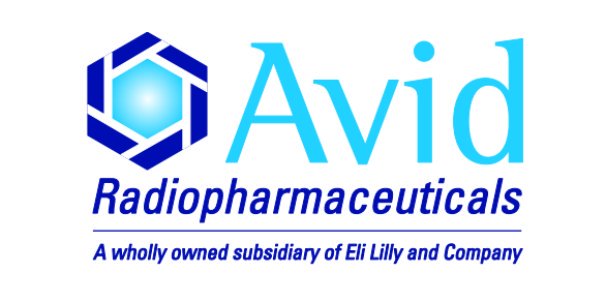 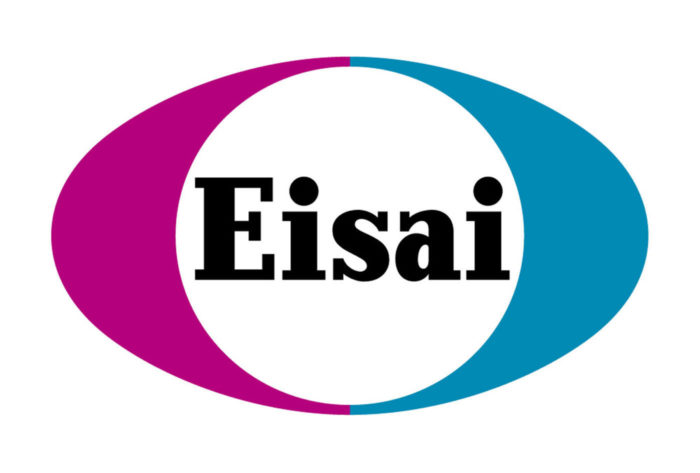